Over the past two weeks I caught up on a series I missed when it aired in 2010 - City Hunter. I had read all the recaps on dramabeans and followed the buzz online, but never got enthused enough to plug in. My loss. 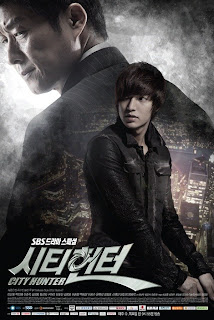 What a great series - corny, cheesy, the most dreadful clothes for Lee Min Ho (strangely, everyone else was well clothed) and absolutely gripping!  The main cast shines. Every interaction between Lee Yoon Seung and Kim Na Na, and also with Ajusshi were great - and Lee Jin Pyo was superb.

Kim Sang Jung is such an experienced actor, tiny shifts of expression give away his state of mind. His contained movements and slow walk had more presence than Min Ho's slightly bouncy walk, and he had seriously scary eyes.

The action scenes in particular were well done - you do not doubt that a slash of Min Ho's wrist could take down a man who has just taken 10 of Kim Young Joo's punches. Shot stylistically (in 2010, looks a bit dated now), each of the major sequences are quite original - in choreography and situationally.

It was an excellently rounded series (I'd have cut quite a few scenes of Mom - and maybe kept it to 16 episodes but that's a minor quibble). Revenge, romance, angst, super action, comedy - all of it good. City Hunter is an idealist - but not in any way naive - and that's what really got me hooked. Philosophical questions get asked - e.g. Is it ok to steal to feed orphans, does the end justify the means.. And while the high road was taken - it might have added weight to show what sacrifices it means to tread the narrow path.

I'd have liked to see what did happen to the Education bill after the President was removed from power.

All in all - a very satisfying 20 hours of watching time. I do not know if I'll be abel to watch this again - but it's definitely what I'd recommend to anyone looking to watch good korean drama.

Posted by Vandana at 5:44 AM No comments: 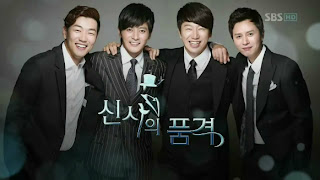 It left me feeling undecided about whether I liked it or not. There was a lot I enjoyed in the drama but at the end when I look back at it, I feel it performed to half it's potential. Perhaps a lot had to do with the actress Kim Ha Neul who seemed to be dialing it in at parts, and her character too wasn't easy to relate with (haven't seen 34 year olds behave so childishly).

This is more a place for me to list down all the great Beeb series I loved to watch and would love to watch again.
Read more »
Posted by Vandana at 2:31 AM No comments:

Posted by Vandana at 2:20 AM No comments:

Posted by Vandana at 2:00 AM No comments:

Others
Posted by Vandana at 1:57 AM No comments:

Updated: Oct 6th 2012
In no particular order (because I haven't time to list them by date or rank), these dramas I've watched and enjoyed. Some hold up to multiple viewing, others not so much - but all those listed are worth the watch once.

Posted by Vandana at 1:50 AM No comments: